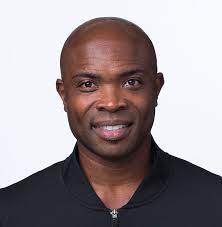 Referee Courtney Kirkland butted foreheads with the Golden State Warriors’ Sean Livingston in 2018. The confrontation led to a one game suspension for Livingston and a week off for Kirkland. The incident also led to a new program to improve relations between the NBA and players overseen by Michelle Johnson, NBA Senior Vice President and Head of Referee Operations and McCutchen, NBA Vice President, Head of Referee Development and Training.

Courtney Kirkland has officiated 1,157 regular-season games over 19 seasons as an NBA referee. He has also refereed 22 playoff games. Kirkland’s officiating experience includes two seasons in the WNBA and three seasons in the CBA, working the Finals in both leagues. He was a high school official for four years as a member of the Baton Rouge (La.) Basketball Officials Association, earning Rookie Official of the Year honors in 1994. Kirkland earned a bachelor’s degree in Computer Science from Southern University. At Northwestern High School in Flint, Mich., he was part of the basketball team that reached state semifinals in 1991 and 1992. Off the court, Kirkland has been actively involved with efforts to curb homelessness in the Atlanta area. He also supports the Help for Flint water relief efforts in his hometown of Flint.